ASCA responded to exhibitor requests for an Open level class without group out of sight stays by creating the Open Dog Excellent (ODX) class in 2013.  ASCA also offers the traditional Open class, now called the Companion Dog Excellent (CDX) class.  Dogs who have titled in either class are eligible to compete in the same Utility classes.  ODX is a Regular class.  Dogs entered in the ODX class are eligible for High In Trial.  Dogs entered in ODX and Utility are eligible for the High Combined award.

Your dog may enter either ODX or CDX (not both) at any sanctioned trial.  Your dog may earn both titles.  Only one of these Open titles will count towards the Hall of Fame.

For a more detailed description, consult the rulebook.

The Directed Open Exercises (DOEs) are broken down into two parts, however DOE1 flows immediately into DOE2 with no break or exercise finished order.

DOE1:  The dog is set up and left by the handler as for the recall.  Once the handler is standing across the ring from the dog, the judge places the cone.  The cone shall be placed three to six feet to the left or right of the direct path from dog to handler. It may be placed midway between the dog and the handler or up to six feet forward or backward from the midline.

DOE2:  When ordered by the judge, the handler sends the dog to the cone and commands and/or signals the dog to sit at the cone (without touching it).  The dog may also sit automatically at the cone.

Answers to some common questions:

BELOW: Where scores were given, these were the consensus of Obedience Judges Sandy Case, Lora Cox, and Cindy Franks 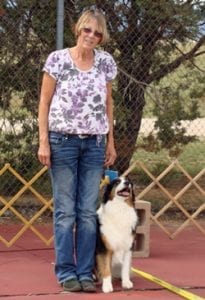 Handler and dog line up 5′ off the short ring gate side facing the opposite side of the ring. Handler awaits the judge’s order to “leave your dog.” The handler will verbally command and/or signal their dog to remain in the sitting position and the handler will walk directly across the ring and face their dog, handler’s arms at his/her side. 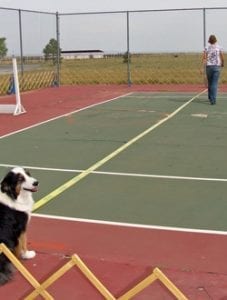 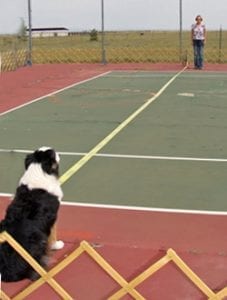 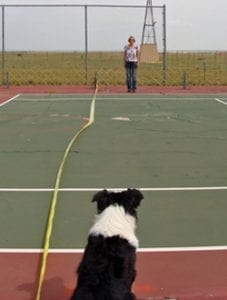 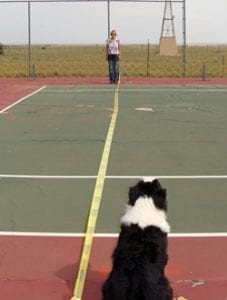 Handler crosses the ring and faces dog. The Committee has added visuals for instructional purposes only – caution tape for the imaginary line from handler to dog, and paint to indicate the 3′ radius on the cone. The light pink circle to the left of the caution tape is where the cone will be positioned by the judge in the next frame. We did the entire circle for this demo so you could clearly see the 3′ radius. (A Judge may use pieces of tape or chalk or golf tees, as they do for jump lines or the figure eight, here-and-there on the radius of the cone as they deem applicable for their needs in judging the radius boundary.) The cone may be placed by the judge either to the right or to the left of the direct path from handler to dog. A handler going crooked from their dog could positively or negatively affect the direct to the cone. A judge’s positioning of the cone 3′-6′ to the left or right from the imaginary line of path from dog to handler can positively or negatively affect the direct to the cone. A Judge may order an exhibitor to re-position themselves if they have positioned themselves such that they are aiding their dog going to the cone.

DOE1 is now completed. You and your dog are now ready for DOE2.

The DOE1 and DOE2 exercises help prepare your dogs for utility. Dogs begin learning to work away from you and take directives when doing so. Please note it is very easy to lose a lot of points doing the DOE1 and DOE2. Your dog may become easily confused from drop on recall to the directive to sit at the cone and then to stand on command, so train and proof.

Clubs MUST offer both ODX and CDX beginning June 1, 2013.

Laurie Sasaki demonstrating ODX DOE1 and DOE2. Thank you, Laurie. As always, you and your dog share with obedience lovers everywhere another exemplary performance and a great demo of the ODX Directed Open Exercies.