The Beginner Novice Class is an Optional Titling class that clubs may choose to offer at obedience trials.  As ASCA’s new introductory obedience class, Beginner Novice is a good place for dogs to begin in obedience.  The BN title can be earned with 3 qualifying scores earned under at least 2 different judges.  Complete rules for this class may be found in the ASCA Obedience Rulebook

A dog entered in Beginner Novice A must be handled by someone who has never previously handled or regularly trained any dog that has earned a BN title or a CD title from any registry, and the dog must be owned by the handler or by a member of the handler’s household or immediate family.  Dogs may be shown in the Beginner Novice B class until they earn an ASCA Open level title (either ASCA CDX or ODX).

After the judge has set up the ring and determined where each exercise will be performed, and before the class starts, the judge will allow handlers to do a brief walkthrough of the Heel on Leash pattern without their dogs.  The judge will indicate at this time which direction the handler will turn during the Sit Stay exercise.  Depending on the number of entrants, the walk-through should take at most 10 minutes.  All exercises, except for the Recall exercise, are done with the dog on a six (6) foot leash. Four examples of ring set-ups for the Beginner Novice class.

Rally signs are used for this exercise and are placed to the right of the handler’s path except for those indicating a change in direction, in which case the sign will be directly in front of the team. 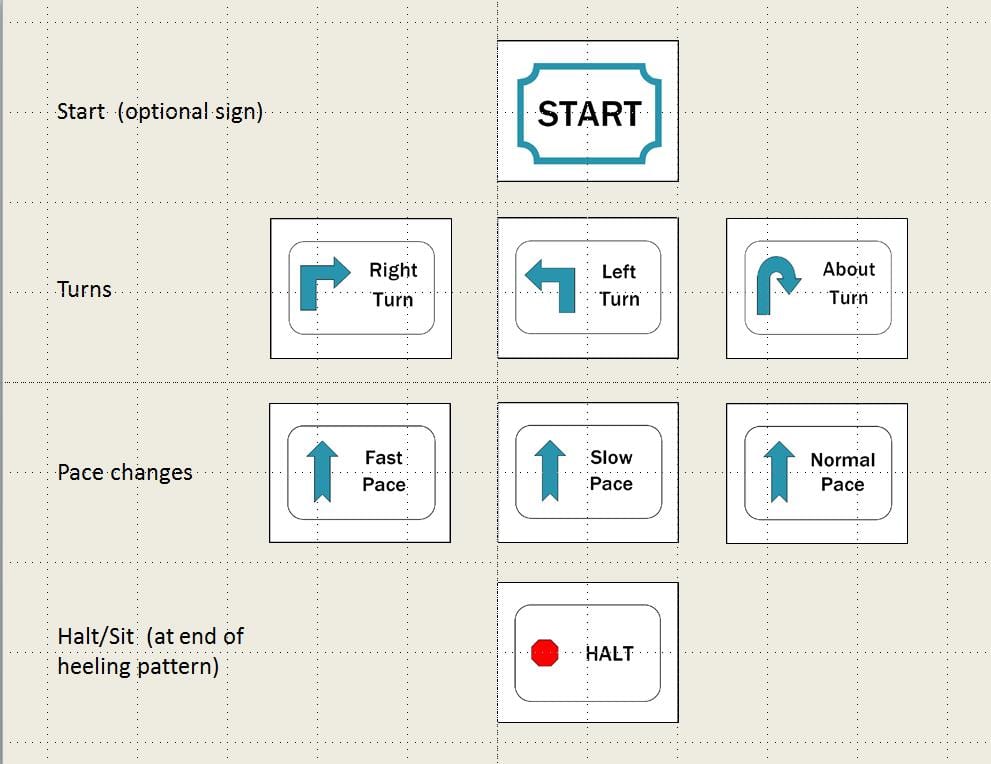 Upon the judge’s command “Forward”, the team heels through the course.  One time verbal praise or encouragement during this exercise will not be discouraged or penalized.  Some examples of allowable praise include “Good dog,” “Yes,” “Atta-boy,” “Atta-girl,” or ”Nice work.”  At the “Halt/Sit” sign, the handler will stop, and the dog shall sit straight and promptly in the Heel position without command or signal.  The judge shall say “Exercise finished” after this exercise.  Scoring is similar to the Heel on Leash exercise in the Novice classes, but please refer to ASCA Obedience Rulebook for details.

The Figure Eight is performed and scored in a similar manner to the Figure Eight exercise in the Novice classes.  Please refer to ASCA Obedience Rulebook for details.

On order from the judge, the handler may command and/or signal to the dog to stay in the Sit position.  The handler will walk forward about six (6) feet to the end of the leash, turn around, and stand facing the dog.

The judge approaches the dog from the front and touches the dog’s head using the fingers and palm of one hand only.  The judge then orders, “Back to your dog,” whereupon the handler walks around behind the dog and returns to heel position.  The dog must remain sitting until after the judge has said “Exercise finished.”  Dogs may not display shyness or resentment, may not growl or snap at any time, or stand or lie down before or during the examination.

Judges will indicate prior to the start of this class whether handlers are to turn left or right after leaving their dog and walking to the opposite side of the ring.  All competitors in a class shall turn in the same direction.  The left-turn and right-turn T-patterns.

For this exercise, the leash is removed and kept by the handler.  On order from the judge, the handler may command and/or signal to the dog to stay in the Sit position.  The dog must stay without being given any additional command or signal, and must not move from the place where it was left before being called or signaled.  The handler walks forward about twenty-five (25) feet to a location specified by the judge, turns and stands facing the dog.  On the judge’s order or signal, the handler commands and/or signals for the dog to come.  The dog must come directly in at a brisk trot or gallop after no more than two commands and/or signals, and sit close enough that the handler could readily touch its head without moving either foot or having to stretch forward.  The dog will not be required to finish.  After the judge orders “Exercised finished,” the handler will reattach the leash to the dog’s collar.  One time verbal praise or encouragement while the dog is coming to the handler will not be discouraged or penalized. 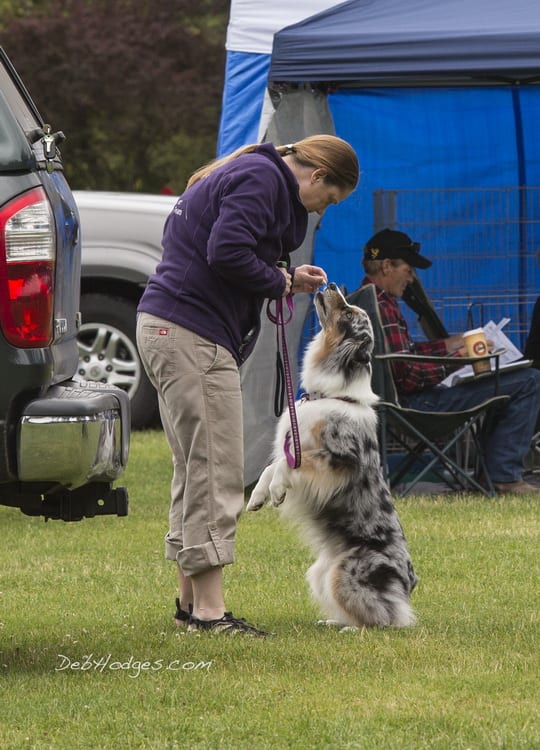 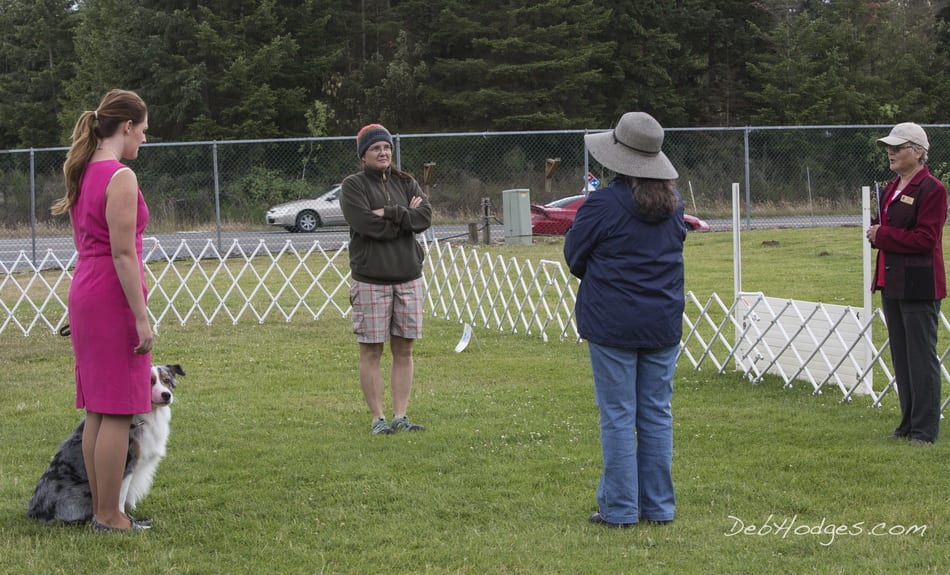 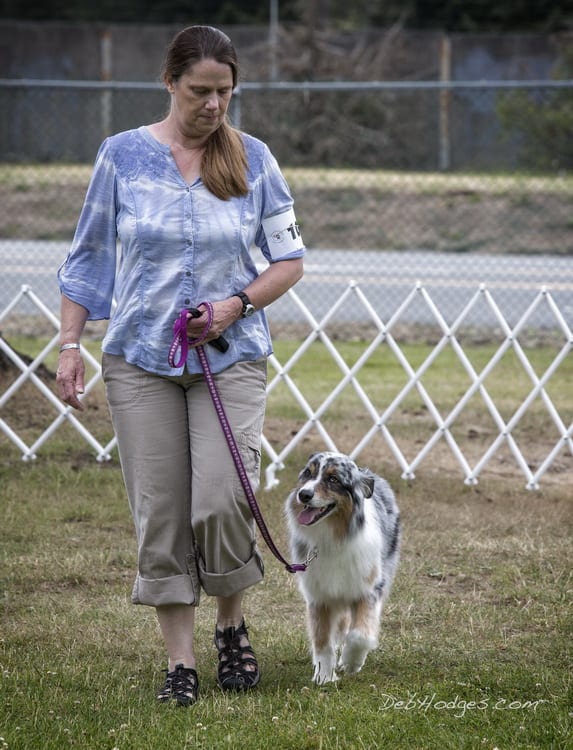 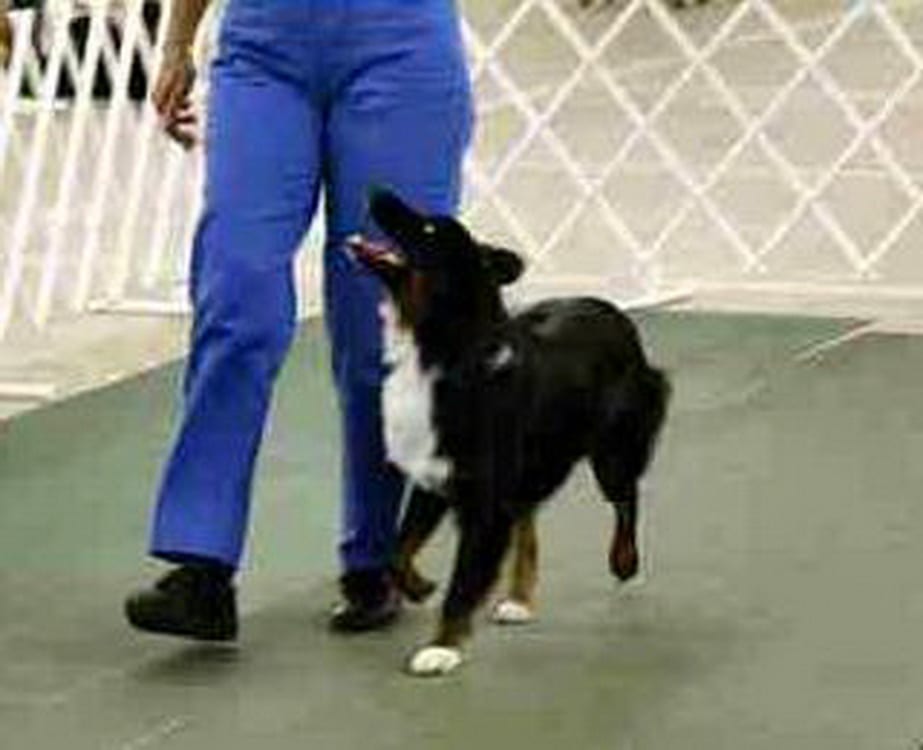 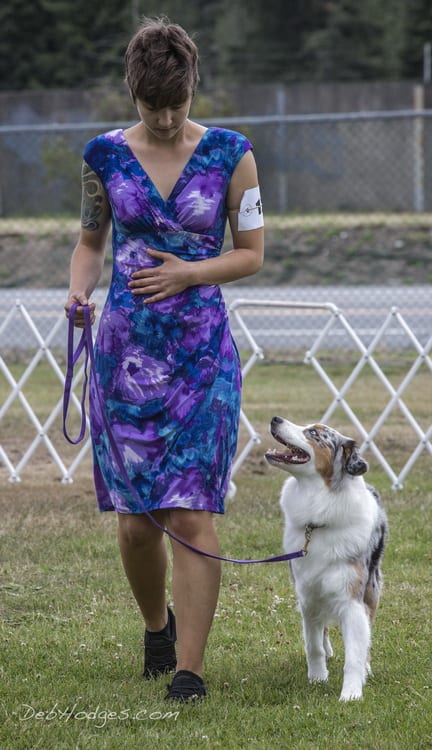