Every year, ASCA host a national specialty. The ASCA National Specialty will be held between September 1 and December 1. The “National Specialty” is a show sanctioned by an ASCA affiliate club or a consortium of clubs, which includes the following events: conformation, obedience, agility, rally, junior handling, a stockdog trial, a tracking test, Most Versatile Aussie competition and other events approved by the ASCA Board of Directors.

The nationals consist of pre-shows/trials, finals and the actual nationals. Finals are invitation-only events, and although they are part of the National Specialty week, each Final is subject to its own additional set of program rules 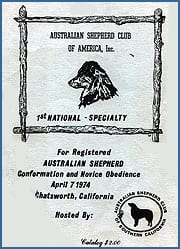