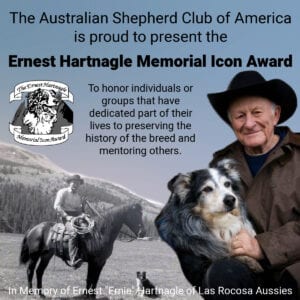 The award is named for one of the founding members of ASCA, Mr. Ernest Hartnagle of Las Rocosa Australian Shepherds. Throughout his life Ernie supported the breed with his service on the ASCA Board, his participation in ASCA programs, and his years as an ASCA Conformation and Stockdog Judge, along with many speaking engagements at the ASCA Nationals and historical articles in the Aussie Times. Ernie always had wise words to share regarding the breed’s past and future.

The purpose of the award is to honor individuals, clubs, or groups which have dedicated part of their lives to preserving the history of the breed, mentoring of others, and/or a sharing of the rich history that demonstrates the value of our wonderful breed.

The award consists of a specially designed lapel/hat pin, a Spider Web scroll, and a certificate. A name plate for the recipient will be placed on a fixed trophy/wall plaque located at the ASCA Business Office.

Nominations will be by letter of recommendation sent to asca.execsec@gmail.com to be shared with the selection committee. The deadline for nominations for this year’s award is: August 30, 2021.

Donations to the Ernest Hartnagle Memorial Icon Award Fund are encouraged to preserve his memory and to support the award so that it can be presented each year to deserving individuals or clubs. This memorial award is intended to carry on Mr. Hartnagle’s dedication to breed preservation through these very same efforts.

Refer to Chapter 8 in ASCA’s Foundation Policy Book for more information. Let me know if you have any questions.